Here you can post criticisms, ideas or questions to the forum!
Forum rules
Post Reply
15 posts • Page 1 of 1

Part I: GP2 on Linux

Basically to run GP2 on Linux is very simple just like running it from a non DOS Windows OS. You just have to:

1. Install DOSBOX for Linux.
2. Download GP2 from the web or install it from CD. Make sure to install it in your Home folder in directory where will be your DOS games or programs just like in a normal Windows OS (for example "OldG" or "dosfiles", or "doswin" folder).
3. Run it with DOSBOX (for Linux)!

For typical GP2 run type this commands in your DOSBOX:

For running GP2 with GP2Lap type this commands in your DOSBOX:

I want to mention that we talk about for Windows based programs (the DOS ones can be runned from DOSBOX like you know). And here is the way how to do it:

1. Download the software you want (CarEditor, GP2Edit 1.86, TrackEditor and so on...).
2. Extract them to directory on your Home folder no matter which. My is called GP2 Patches.
3. Run them using Wine and Vineyard (download their latest versions). Usually only Wine will be enough to run this programs.

Note about Wine and Vineyard: If you install them both you must first install Wine, after that Vineyard. Then make sure to have their latest versions. When you run a Windows program for best results click on the .exe file or make a Starter (shortcut to your desktop).

The other solution is VirtualBox. On it you can install DOS 7.10 and Windows 98 SE, and you will have one great playground for your old games.

Everything seems to work just fine.

It's with "improvements". For example there is no console at all behind the main window. The commands for starting DOS game or program are a little bit easier (see the first post). About the perfomance, well seems to be the same.

The same as DOSBOX in Windows. What is happening here? This are very simple things, aren't they?

I had updated the first post (more information is added). I hope that now all questions are cleared.

Someone should show a black flag to this guy.
Top 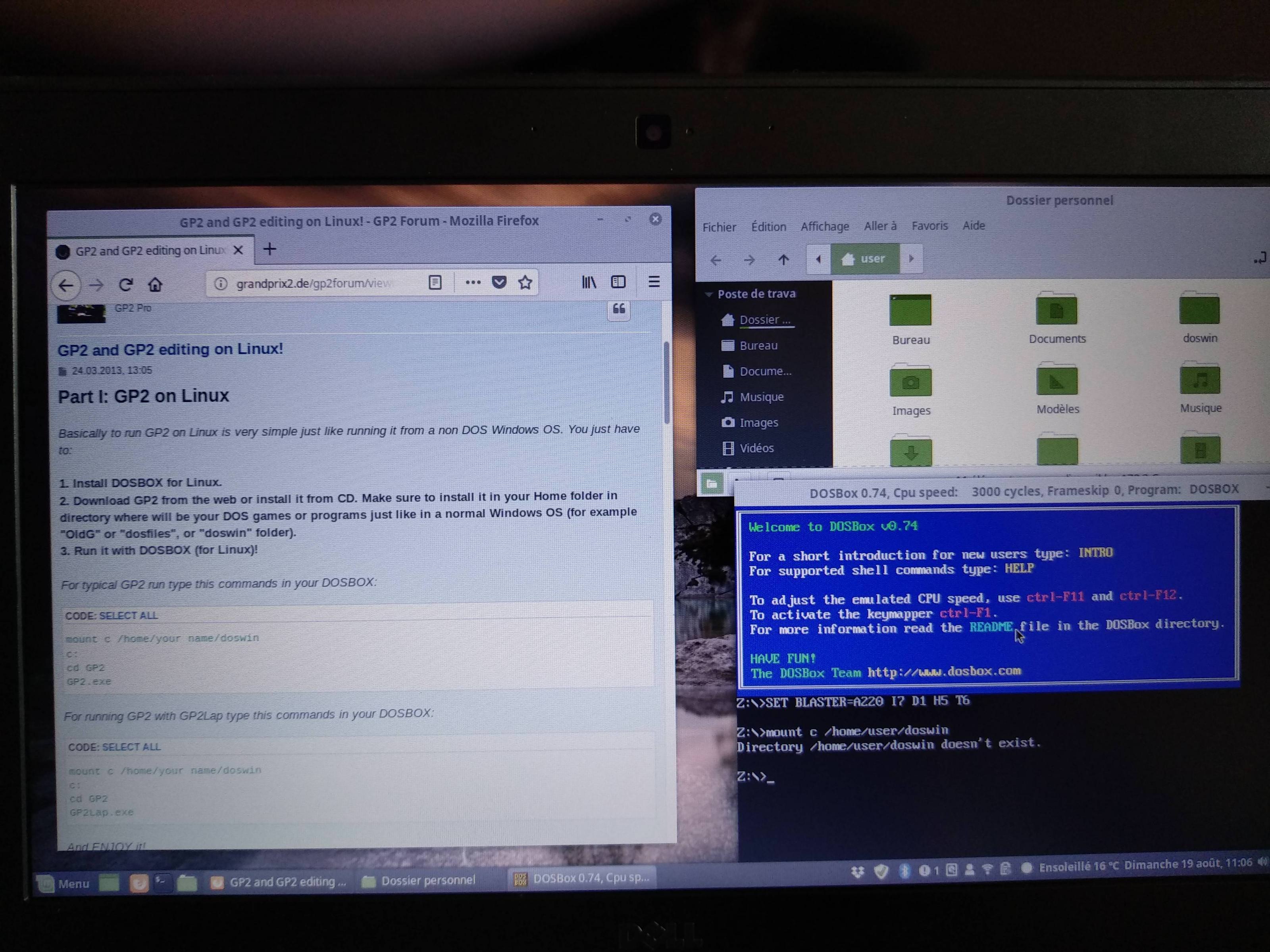 I am new to this forum but I used to play GP2 as a kid. I am now trying to get it to work again. Right now for about a year I have been playing Indycar Racing 2 from papyrus on DOSbox through linux. I have it working good. I am trying to locate GP2 to get this one going as well.
Top

Hey.
I managed to install and run GP2 on Linux by using Dosbox.
All in all it works fine. But I face a very strange issue.

When driving (accelerating) everything is fine and then it is like I take my finger from the A key. But it's still on it.
Also, with the steering keys I have this issue.

As far as I can remember this never happened under windows 95 or DOS ages ago.

Anyone ever had the same problem? Is it Dosbox specific? Or Linux?

I also installed GP and this game works fine. So, I am a little bit lost.

I use dosbox and never had such a problem. But I never used Linux so I think the problem is in that area. I hope someone can help you a bit more!

Good luck!
The winner ain't the one with the fastest car, it's the one who refuses to lose.
Top

Thank you for the reply.
I had the opportunity to test the same game and setup on windows. And yes, the problem didn't occur.
So, it must be linked to Linux and Dosbox.

Now I also have this issue with the GP game. What is strange. At least I know now that Dosbox and the game are working fine.