Many rumours, but also confirmed programs were written and told during the last weeks. Althoug some teams pulled out of the LMS (Audi, Epsilon-Euskadi), there will still be a big field, as there are some new teams or teams that enpand there efforts.

Concerning the 24 hours of Le Mans, there are several positive news. Audi and Epsilon-Euskadi will enter there and in addition rumours say, that there will be an Aston-Martin LMP1 entry. I made a (incomplete!) list, with the most important teams, that will (most probably) be active at the Sarthe in 2009. I marked some interesting things red.

In addition there will be some teams with Courage and Zytek chassis. If we will se a Porsche RS Spyder again, is not clear at the moment...

Ah, and by the way, case you wonder why I opened this thread in the "workingarea": Probably I will make a carset for LM 09, because this line-up seems to be even better than the one in 2008 (which was already great).
Visit my website: FK's sportscar project
Top

Indeed the 2008 carset Le Mans looks great, and can't say anything else than;

Interesting to hear that there will be customer-entered R10s now, after all - what I read in previous weeks and months sounded to me like Audi thought, unlike the R8, that model was supposedly too complex to be entered by a non-works team. I guess after some negotiating, this isn't an absolute position anymore.

It's a very nice development for LMS, too, because now, Peugeot doesn't have to run basically uncompeted, like 2007...

Seems that the beautiful Epsilon will only start at the LMSeries after the 24 hours of Le Mans. So, i wont see them in Spa... 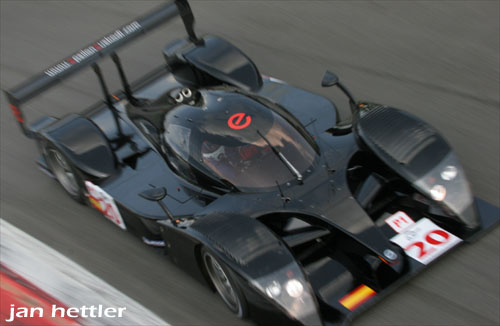 But apart of that, i can hardly expect the first race...

Just veering off-topic slightly, anyone watching the Daytona 24 Hours? I always find this race interesting, you get an even better mix of drivers than at Le Mans, and obviously it's got the history of Le Mans cars going there in the past. Shame you don't get to see Audi v. Peugeot there, that would be awesome seeing these two battling on the banking! The current breed of Daytona Prototypes are so weird-looking.
Wander over to http://www.facebook.com/PixelDreamsGP2 and click "Like" for updates and screenshots from the world of PixelDreams!
Top

http://www.autosport.com/news/report.php/id/73008
Wander over to http://www.facebook.com/PixelDreamsGP2 and click "Like" for updates and screenshots from the world of PixelDreams!
Top

Today the first spy-pics of the new Audi R15 have appeared in the www. Here are some links:

I guess with the silver/red/black livery the car will look pretty good, without it, it looks not that good I think.
Visit my website: FK's sportscar project
Top

The new Audi does look good.

Anybody working on some new sportscars? I am currently working on some nice GTs for a fictional carset that we can all mess about with. Don't mock my shabby work because I know it's awful, and I don't have the same patience as Greyhead or V12 Power to get the front and rear of the cars looking accurate.
Find me on @jakesansonofficial or www.jakesanson.com
Voice of the FIA Karting World and European Championships, IAME Euro & Asia Series, and more.

Yes! The new Audi R15 testcar is ready now, together with a 2009-spec carshape and menu-arts. Next car to finish is the RML-Mazda.

I'm going to release some of my GTs although I fear people won't like them...
Find me on @jakesansonofficial or www.jakesanson.com
Voice of the FIA Karting World and European Championships, IAME Euro & Asia Series, and more.

When I saw the picture Audi put out after this "spy photos!11" stuff, I was immediately reminded of this, uh, former competitor car.

Is anybody planning some classic sportscars from say 1996 Le Mans onwards? That would be sweet.....
Find me on @jakesansonofficial or www.jakesanson.com
Voice of the FIA Karting World and European Championships, IAME Euro & Asia Series, and more.

jakesanson wrote:I'm going to release some of my GTs although I fear people won't like them...

I'm really looking forward to this!

AD wrote:When I saw the picture Audi put out after this "spy photos!11" stuff, I was immediately reminded of this, uh, former competitor car.

Indeed, without knowing that the R15 is an Audi, you might think it is the new WR (although they've build a new car last year, that looks different).


jakesanson wrote:Is anybody planning some classic sportscars from say 1996 Le Mans onwards? That would be sweet.....

I'm actually working on a 1998 FIA-GT/Le Mans set, which includes all GT1 cars that drove in FIA-GT (Persson, Zakspeed) and Le Mans (Toyota, Nissan). To have enough cars my plan is to include the Oreca-Viper and the Marcos LM600 as well. But beside this I am working on 3 other carsets, so it may take some time.

Can't wait to see your work!

All I have done with the GTs is basically give those that didn't have any sponsorship some more racing trim. The Aston Martin doesn't have any sponsors (because when did it??..) and I think the Ferrari is probably my best effort. It's based on a yellow 1997 Ferrari F1 car i found on the gprix2.com website years ago. The Pagani looks quite nice too.

Wherever possible, I have tried to make these cars look authentic, although with some I have kinda made up my own teams. I know they're not great and I am trying to do better, but here's what I have so far...

Find me on @jakesansonofficial or www.jakesanson.com
Voice of the FIA Karting World and European Championships, IAME Euro & Asia Series, and more.