Hello, I've just started playing GP2 but cut my teeth on World Circuit decades ago. Saw recorded races on YouTube and then found this site. Just got a CD on ebay and game is on a Windows 10 system with DosBox .074 and D-Fend. Still some minor technical issues with sound and getting my Flight Yoke and Pedals to work with the game. Hopefully I may find an answer here.

There is something about this game, perhaps because it is arcade in style and yet technical and detailed in scope. I expect to modify things as I become more familiar with it's out of the box version, start adding tracks and car sets. I'm a fan of the 70s more so than todays racing. I like true manual gear shifting as opposed to paddles.

Hello! After idk how much time (1 year?). I finally played GP2 again. 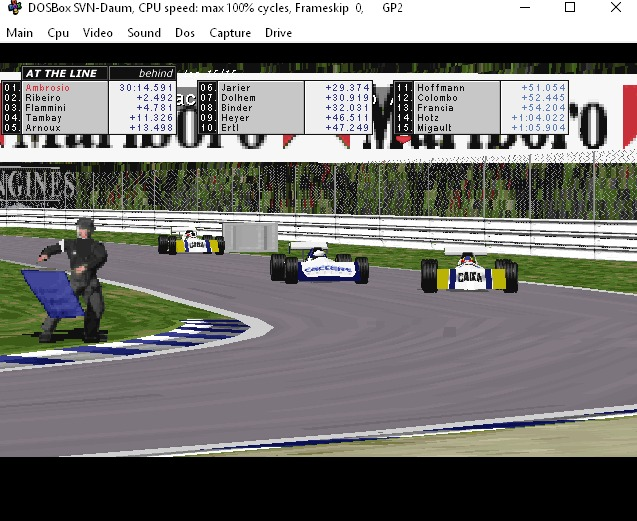 "The Fox provides for himself. but God provides for the Lion" - The Marriage of Heaven and Hell by William Blake

Also back to here and glad to see old friends still posting and making new stuff for this sim.

I thank you all.
Top

I'm playing GP2, although I don't have proper time to play.
I'm considering an alternative way of playing. Before getting into GP2 in the late Nineties, I played some other famous racing games on the consoles of the time:

Those arcade games were fun, even if each race took just 5 or 6 laps. And, if I remember, there was a single chance to qualify (a system that, later, real life Formula 1 adopted, in 2003).
There are more than 200 or 300 tracks (thanks to this community) that I'd like to give a go.
So I guess I'll do that. Whenever I don't have the time to my favourite 50% Race Distance model, I'll do 10% Race Distance championships. Arcade championships.
Top

Hello, I registered kinda some months ago, altough I had already played the game in the past, I have vague memories of playing it like being two years old at my aunt's computer (windows 3.11, pentium 286, etc), then I played it for some time, then stopped, and then returned.

Currently I have the original version in rom station and the modded one in a folder in my desktop. Right now I am racing the 1987 championship with a Larrousse-Lola Ford with Yannick Dalmas. I am currently in 2nd position and lola is leading the constructors championships, while I am second just behind of ANDREA DE CESARIS. Yes, I have all the cars running as if it was a spec series.

After that I am gonna do the 2000 Moto GP Championship with the carset of that season, which you can find in the transformed to f1 sessions.
Top
Post Reply
20 posts